Endorsing Baker - Lowell's Crop of "Cake & Eat It, Too" Democrats

Lowell is not unique. Cities, like Quincy and Chicopee, suffer this cancerous malady. I'm referring to elected Democrats "crossing party lines." Ostensibly, because they "vote for the best person." They disguise their ruse, as stewardship. But, it is nothing more than cowardly, hedging of the electorates muses; while positioning their self-interest close to those that hold the ladle of tax dollars.

For the selfish, transaction minded politician, the world of politics is seen through this lens:
While Republicans decry 'wasteful government spending,' many Democrats try to straddle a line, posing as a 'fiscal watchdog.' Yet, all the while, their only focus is robbing Peter to pay Paul. And, THEIR constituents are ALL named Paul! These charlatans become practiced in the art of insidiously using tax payer funded largess to barter influence, cronyism (fill in the blank _______ with tactics that slant the playing field), etc. Such a scheme is wildly successful in Massachusetts politics. When you are an elected patron, using 'juice' to get jobs and contracts; looking for folks to hold signs, knock doors, phone bank is easy, breezy beautiful. And, when you begin to factor in familial saturation, via the Fabergé effect (Link), the votes start to pile up.

Recently, Lowell has had a bumper crop of "Life Long Democrats!" crossing party lines, And, while it is pure speculation, as to what their motives are, I hold my votes for those that more clearly define what they are, and what they are not.

In today's newspaper (Link), Lowellians got to read this.
(bold mine)

Elliott said the state needs a governor with hands-on experience in finance and managing workforce. Nangle said Baker’s experience in both public and private sectors makes him the most suitable candidate.

Nangle said he thought carefully about the candidates, and chose who will be best for his district.

“Nobody comes to the top of the résume pile other than Charlie Baker,” Nangle said.

Nangle told The Sun he decided to endorse Baker about 10 to 14 days ago. He said he believed announcing his choice in the final days would be most effective for the campaign.

“I’m confident that I can pick up the phone and ask Charlie for help.”

Two other prominent (flash in the pan?) Lowellians, opted to jump fully onto the commercialism of the Baker Campaign.

One of my media buddies tells me I have to excuse Dave Daly, because he is a business man. The gist of the assertion is that making a buck comes above all else. If profit outweighs principle, then what can I say?

But, before we get to the other cast member, fledgling Lowell pol, Corey Belanger,
we should talk about the titular 'Clan Leader' of Lowell's run away Dems:

Doesn't State Rep Dave Nangle just look like he is having the time of his life? Maybe, this picture is classier than an imagined one of him mooning Tom McGee? Or, Robert A. DeLeo? #countyourblessings But, bet your bippy, the grip 'n grin for the Sun camera is nothing less than THAT! Ya see, Nangle has been down this road before. Surprised? 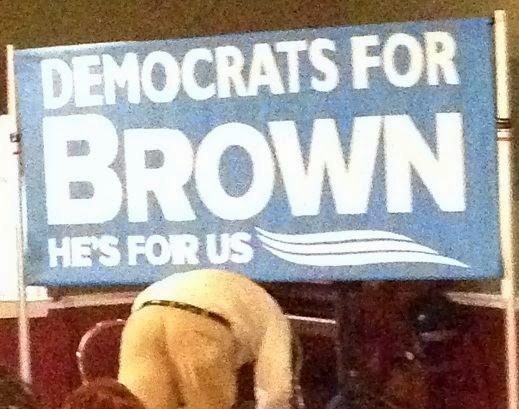 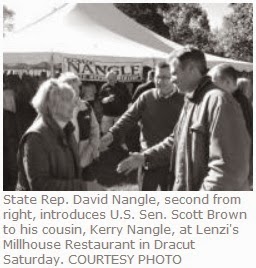 You may notice, I have a bias. I have no quarter for Nangle, et al political malfeasance. This is nothing new, as I have taken note, before (Link). But, my exclamations and less than flattering epithets have fallen on deaf ears within the City/State Party.

After Nangle endorsed Brown, against Elizabeth Warren, our Party did not break a sweat trying to find a primary opponent. There WAS some sort of public wrist slapping, but it appeared to be mild.

STATE REP. Dave Nangle won't be attending the Democratic Party convention in Lowell next Saturday because of his endorsement of the GOP's Scott Brown in 2012, but that doesn't mean the Lowell Democrat won't partake in any of the weekend's festivities.

"I'm glad to participate with the Democratic Party and do my part," Nangle said. "We want to show everyone that Lowell is a great city and we know how to welcome people."

Nangle said he has had a couple of good conversations of late with State Democratic Party Chairman John Walsh and any bruised feelings about not endorsing Democrat Elizabeth Warren have been smoothed over.

The Lowell Democrat also said he plans to make the most of his Saturday away from the convention.

"I'll be at the beach or out golfing," Nangle said.

City Councilor Rita Mercier likewise earned her persona non grata status at the upcoming convention for backing Brown. She also won't be attending any convention parties, saying she was not invited.

"I'm a Democrat at heart, but I'm like a banished cat with rabies," Mercier said. "I have a scarlet letter written on my forehead."
-snip

As it turns out, Rita Mercier is still smarting over her treatment, by local Democrats, for supporting Scott Brown. You can hear her coached lamentations, from Oct. 29th, here (Link, 8:00 minute mark) But, note - she still topped the ticket in the last municipal election. So, her cries of torment are rather hollow.

I'm not so sure first term Councilor Corey Belanger will fare as well as the storm weathered Mercier. He has been trying to thread the needle. 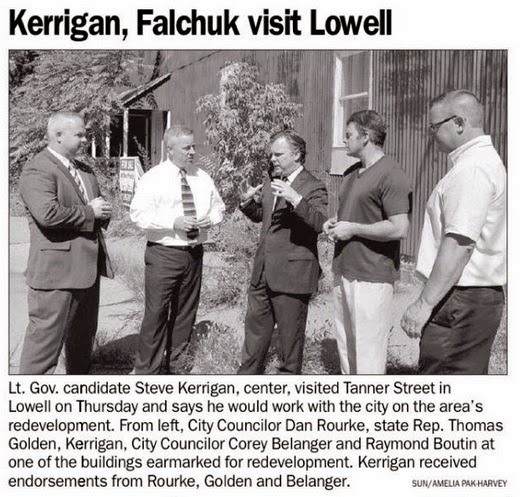 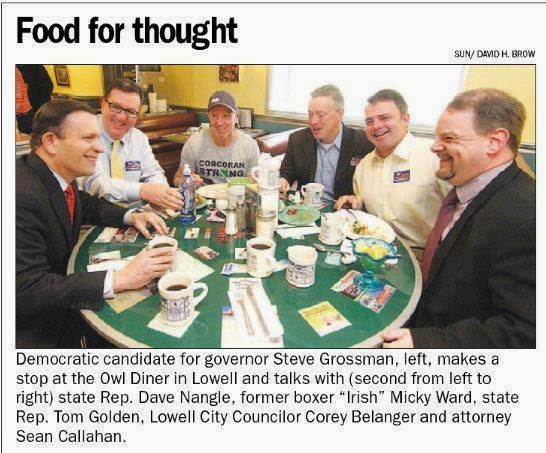 But, can we really blame Corey for kibbitzing with the "Hurray For Me" Dems? Their "Cake and Eat It, Too" disposition is tacitly tolerated by our party's higher ups!

The Lowell Democrats scored an impressive legislative feat this past week, getting a $20 million authorization inserted into the state's $1.3 billion bond bill with the blessing of House Speaker Robert DeLeo . The local money will fund an expansion of the Tsongas Center at UMass Lowell, adding a practice ice rink and conference rooms, and enlarging it to attract medium-sized conventions.

Few lawmakers had the same good fortune in a bill designed to repair state buildings and fund mental-health projects.

And to think there was a time when Nangle and Golden couldn't get a phone call through to the speaker.

In 2008, Nangle, Golden and former state Rep. Kevin Murphy, now Lowell's city manager, were relegated to the Statehouse doghouse after backing an unsuccessful attempt by Norwood's John Rogers in a contentious leadership fight with DeLeo .

All were stripped of their chairmanship posts, stipends and -- most important -- access to leadership. State Rep. Colleen Garry, D-Dracut, also backed Norwood and suffered a similar fate.

Through the years, however, Nangle and Golden have slowly and steadily caught leadership's eye.
-snip

Maybe, there is a fine line that needs to be finessed? Especially, in the battle ground cities that teeter on voting Republican? Further, I cannot always blame the electeds that opt to reflect the sentiments of the voters that bother to show up on Election Day. My own Rep will do, as much. But, on momentous occasions, like supporting Marriage Equality, he leads his constituency. I can only ask, so much

The true problem is not the nervous pols, shuttling their principles for votes, as those clearly depicted, above, so often do.

The bigger issue is a Party regime that ignores the blatant slights. Leaving those of us on the ground, in such places, left holding the bag.

###
Update: Below is Nangle's breathy endorsement of ... "Bring Home the Bacon Politics." The video seems chopped. But, the gist is that Karyn Polito & Nangle will bring home the bacon.

Must be the new Courthouse, they want sooo bad.

###
PS. Another opportunity to submit comment, and/or engage in debate, is provided via Facebook - Lowell Live Feed Forum (Link).
Posted by Jack Mitchell at 1:38 PM